Lined up side by side, ready to take off, my grandson’s restraining arm shoots out across his little brother’s stomach.

They take off across our grass. It’s a dubious race, one that counts on a certain seven-year-old against a five-year-old sibling pecking order. The course, established by the elder begins and ends by his command. The winner, most certainly, determined the same way.

“and let us run with endurance the race that is set before us…” Hebrews 12:1-2 NKJV

Sometimes, my eyes seem to land on those who have not run well or those who didn’t end well.

My attention is drawn away by Christian leaders and longtime followers drifting from truth and in the end dishonoring God. It upsets my rhythm and slows me down. Sometimes I look at them when my eyes should be resolutely focused on Christ.

On the heels of the faith chapter where Abraham and Sarah, Rahab, David and Moses along with a host of faithful runners testify, Hebrews 12 reminds us we are in a race. It reminds me, I’m not done yet.

The Apostle Paul spoke of the race we run in his letters. He tells us in 1 Corinthians 9:24 to run in such a way as to win. In Galatians he warns about running in vain and what might hinder our run. (Gal. 2:2; 5:7) And, in 2 Timothy 4:7, an older Paul declares victory in fighting well, finishing the race, and keeping the faith.

I’m not done yet

Paul’s arduous course, likely ended in martyrdom. He lived with persecution and sorrow, yet paradoxically overflowed with the joy of the Lord. Imprisoned, burdened and mistreated, Paul raced to the finish with assurance despite many others who did not.

There are Demas’ today. You might know someone who once followed Christ, and then walked away. We dissect their swerving, stumbling, falling and detouring. It saddens us and shocks us to hear of shipwrecked faith, but it should not surprise us.

“Now the Spirit expressly says that in later times some will depart from the faith…” 1 Tim. 4:1 ESV

We will become discouraged, worn, and spiritually despondent if our eyes leave Jesus and focus on them. This world and the season in which I run, feels like its full of landmines, earthquakes under my feet, hurricanes on the horizon, and deafening distractions. My race ahead appears difficult and how it ends includes unknowns. Yet, looking at those who haven’t ended well isn’t the focus of the Hebrews race.

“Therefore we also, since we are surrounded by so great a cloud of witnesses…”

More and more of my loved ones and friends are with Jesus. My “cloud of witnesses” grows in this stage of life much faster than I want. They’ve crossed the finish line while I plod on slower and slower.

If my Dad and Mom, those close friends who have finished the race, or mentors of my youth, could cheer from the stands, perhaps they would shout, “Don’t look away,” “Keep going,” “Stay the course,” and likely, “Get rid of the weights.”

“Therefore we also, since we are surrounded by so great a cloud of witnesses, let us lay aside every weight, and the sin which so easily ensnares us, and let us run with endurance the race that is set before us…” Hebrews 12:1-2 NKJV

It might not be a pretty race, there will be potholes and hurdles, but Hebrews 12 reminds us, we can run it well if our eyes don’t stray from the Person waiting at the finish line. The faithful of Hebrews 11, “of whom the world was not worthy,” testify to whom they ran toward. The goal kept them faithful runners.

“…looking unto Jesus, the author and finisher of our faith, who for the joy that was set before Him endured the cross, despising the shame, and has sat down at the right hand of the throne of God.” Hebrews 12:1-2 NKJV

I have known many faithful-to-the-end runners. You may as well. Their examples admonish us to lessen the weights, abandon sin, and keep our eyes straight ahead, where they belong. They compel us to ask ourselves, “what am I in love with?” The answer to that reveals our focus.

We cross the line in power chairs, crutches, stretchers, and some carried on the backs of others. Young, old and in-between, we help hold up one other and encourage each other to do the same. This is how the body runs victoriously. 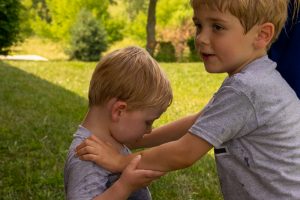 “I won!” declares my grandson, taller, older, faster and leader of the race.

I see my younger five-year-old grandson’s face begin to crumble. For just a moment think I might need to step in. But big brother sees it too, and his gentle heart responds. He immediately steps to put an arm around his little brother and justly declares with triumph, “We both did!”