“No, no, no,” he said. He held his little hand like a stop sign. His voice raised a breathy octave. “Let’s not play it like that, let’s say if you want to move ahead on red, you can.” He nodded up and down, cocked his head to the side and put his pleading blue eyes close to mine.

The board game lay open on the table, a kaleidoscope of shapes and colors. 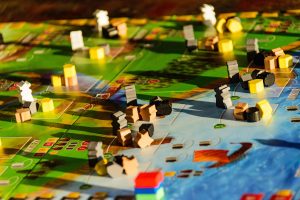 “Do the rules say you can do that?” I asked, locking my eyes into his. As games go, this was an easy one, but the simplicity didn’t matter. When the rules get thrown out, nothing makes sense.

My grandson confidently moved his little bright green marker from the spot it was supposed to be stuck on, through a happy path he shouldn’t be skimming over.

“Follow the rules for goodness sake,” I wanted to say.

When the rules get thrown out, nothing makes sense

I felt a little tired and the high pitched insistence from an impossible-to-reason-with-as-an-adult-person drove me to fold to the insanity.

Rules. Why do they get in our way?

From little people to adult, rules can be like an annoying pebble in our shoe.  We are always tempted with that inner kid’s logic to change directives midstream or switch them for a more palatable substitute. Restrictions, we think, are in our way. With the smallest of tweaking, like “did God really say?” we easily manipulate criterion to our advantage. It’s a tactic as old as first-dirt. The kind that formed first-man.

I’ve been reading Ezekiel in my quiet time.

“Ezekiel?” my husband asked, his eyes lit up like Christmas revisited. “I love Ezekiel.”

“Whaaaaaat?” I questioned. I’ve been eyeing how many more chapters till the end for a while now.

Rules come up in Ezekiel 20 repeatedly, like chewing gum on a shoe.

“I gave them my statutes and made known to them my rules, by which, if a person does them, he shall live.” Ezekiel 20:11(ESV)

“They did not walk in my statutes but rejected my rules, by which if a person does them, he shall live…” Ezekiel 20:13 (ESV)

“…because they rejected my rules and did not walk in my statutes, and profaned my Sabbaths…” Ezekiel 20:16 (ESV)

And on and on, over and over again.

Whose rules are we talking about? God designed rules for the Israelites’ good. But, they chafed under them. Their disobedience not only grieved God, but it brought disaster.

I gotta admit, generally I am a rules girl. Don’t step on the grass, don’t cut the tag, don’t push the button and all that. But I don’t always love God’s laws like the Psalmist in Psalm 119, an interesting contrast to my reading in Ezekiel.

God’s rules represented a precious relationship with the Father.

Listen to the Psalmist’s pure pleasure:

My father-in-law used to say to his children, “You don’t HAVE to do the dishes if you WANT to.”

A mindset of wanting to do the right thing like the author of Psalm 119 can only come from loving what God wants more than loving what I want. It grows in a heart that loves God above self, and sees His words as life giving rather than drudgery.

God’s rules are laid on the foundation of God’s character.

God is love. He is merciful and gracious.

God is good. There is no evil in Him.

When we look at the bigger picture, those pesky rules emerge as pure grace overflowing.

This is what the Psalmist experienced in his exuberance for God’s Word.

My grandson and I fold up the board game. We’ll tackle the deeper issues of rules next time around, for goodness sake.