“Uh, uh, uh,” I hear the warning in three short grunts. I turn quickly to find out what my not-quite-two-year-old grandson is doing.

My quickness is due first to fear for his safety and secondly for the life of whatever he might be holding in those chubby little fingers. But touching what a baby should not is what babies do. It’s born into their genes. That little finger wants to touch a big no-no even though the result will be a lot of doo-doo.

His intent gaze breaks from the white vase on my coffee table to his Mommy’s  stern eyes.

For a moment his finger hovers in mid-air, half the distance to the goal line where a very desirable breakable thing sits. One that Grandma should know better than put where she did.

He is weighing options. 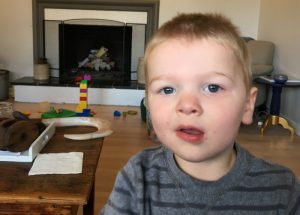 Then as if that offending hand had acted on its own, a decision is made. He quickly shoves it behind him and makes a 180 away from the breakable vase. Little feet blur a path to the other side of the room, where he bumps into his grandpa and swings up into his arms. The no-no is forgotten in the laughter and embrace of someone who loves him.

I guarantee however, without the big people around to keep him from picking up that vase, one touch would have led to the next step. My grandson would have held my vase between those two chubby hands. Not only would break the rules and break the vase apply, but my grandson could have gotten hurt had he dropped it.

Leviticus, read without context has some what appears to me as seriously odd passages. There is a lot of blood, more information than I prefer to know about perversions, infections and a thousand rules.

It is filled with “Don’t touches.”

Touching was a big thing in Old Testament law and culture. One touch against God’s commands and it defiled the entire person.

Interwoven throughout the “don’t touch” admonitions are the words, “I am the Lord.”

The impact of those words, “I am the Lord,” interspersed between laws reminded the Israelite people of not only His right to make the rules, but of His purity, untainted by sin’s stain.

God detests the barrier of sin brought on by Adam and Eve’s first disobedience to the “No touchy.” God demonstrated His love by making  a way to bridge the gulf, so a holy God and a guilty child can touch in relationship.

“I am the Lord,” reminded them of a God who cared for them and did the right thing for them, but was not compromised by any caress of evil. God’s rules, which we like little children sometimes chafe at, display God’s infinite grace.

I see myself in my grandson. I am aware of my tendency to reach a tentative finger toward some action or attitude I should never touch. He wants to spare me the intense grasp of something that would distance us. Interlaced within stuff hard to understand, God demonstrates mercy impossible to comprehend.

I get that sometimes obedience owes no explanation. We learn it because it is right.

The more I know of my New Testament Jesus the greater is my embrace of the deep mercy underlying God’s Old Testament rules. They point to Jesus. Like a child confronted with a “no touchy,” God’s words lay the foundation for wisdom to do a 180 from sin and run right into the open arms of His love.