“Do you like me?” the elder three-year-old asked his little brother.

He rolled onto his side and hugged the little body of his two-year-old brother lying beside him.

We are a society obsessed with likes. The more the better. Better for business, career, readers, popularity and personal self-esteem. Or so social media implies. Those tiny numbers on the bottom of a post, increasing like the national debt before our eyes, matter a great deal.

Like has an unjust way of testing love, of deeming it either changeable or conditional. 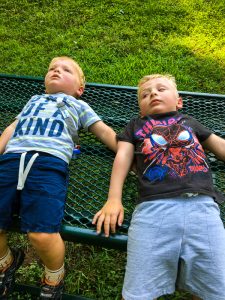 In recent days we’ve been reminded again that what we see on our screens sometimes has a massive disconnect from what is true. We’ve seen relationships turn tragic and question motives behind digital hype.

Before Jesus went to the cross, public opinion was divided. Some believed He was the Messiah, some couldn’t, and others believed but were afraid to admit it.

“Yet at the same time many even among the leaders believed in him. But because of the Pharisees they would not openly acknowledge their faith for fear they would be put out of the synagogue; for they loved human praise more than praise from God.” John 12:42-43 NIV

They knew faith in Jesus as Messiah would not be liked by the religious leaders. To side with Jesus split them from their Jewish culture and history. They didn’t want to be ostracized. They feared repercussions. They wanted to be liked.

I remember my Mom watching me go through those difficult tween years. I shrugged off her “I love you,” as almost inconsequential because I figured she had to love me. She was my mother, she had no choice. But like?

Sheesh, there are still days when I don’t even like me. And, if I’m completely honest, at times I’ve felt that way about God. He has to love me. He created me. He died for me. But does He like me?

I have to be smart enough, good-looking enough, thin enough, tough enough, funny enough or rich enough to earn like. Because as much as we all want to be loved, it’s really nice to be liked.

I recognize how the magnet for human praise draws my attention away from God’s Magnificence. Humankind has always confused love and like, cheapening the first and elevating the second.

I mess up. I fail. I displease even myself.

Humankind has always confused love and like, cheapening the first and elevating the second

The answer of course is to turn my eyes fully on Jesus. His love is unconditional. There I find something much greater than a thumbs up “like” gone viral. I cannot begin to understand the magnitude of God, of the way He loves, the manner in which He delights in me. His total and complete holiness is too great. Too broad and complete. His acceptance of me by grace through the blood of Jesus is full and satisfying.

And it is enough.

“No longer do I call you servants, for a servant does not know what his master is doing; but I have called you friends, for all things that I heard from My Father I have made known to you.” John 15:15 NKJV

2. He takes pleasure in us.

“For the Lord takes pleasure in His people;” Psalm 149:4 NKJV

“For whom the Lord loves He corrects, Just as a father the son in whom he delights.”  Proverbs 3:12 NKJV

“For I know the thoughts that I think toward you, says the Lord, thoughts of peace and not of evil, to give you a future and a hope.” Jeremiah 29:11 NKJV

“You did not choose Me, but I chose you and appointed you that you should go and bear fruit…” Jn. 15:16 NKJV

A quest for approval will always fall short of true satisfaction. The courage we need to be authentic, to be bold in our faith squelches if focus elevates people’s opinions over God’s. We need courage to place God’s likes higher than ours, to move our eyes upward, and away from distractions.

Finding completion in Christ while I walk through the brokenness of this life requires a steady gaze. It takes sitting in the truth of Scripture and letting it seep into my soul. It means learning to genuinely like what Jesus likes, to take pleasure in Him.

I am His friend, one He delights in, cares about, thinks of, takes pleasure in, rejoices over, and He chose me before the foundation of the world. That pretty much takes care of it all.

“Do you like me?” Luca asked his little brother.

I am God’s friend, one He delights in, cares about, thinks of, takes pleasure in, rejoices over, and He chose me before the foundation of the world

“Yeth,” Enzo answers through the bubbles of spit on his lips.

There is genuine affection as they giggle and hug. There is like.