“Can’t we all just get along?” she asked. Watery pools gathered at the bottom of her eyes ready to splash over, waterfalls of reflected blue. Life as a thirteen-year-old had become invaded with tween girl spite and division.

I hate confrontation. I despise division. It gives me a pit in my stomach. That’s not to say I myself am a breeze to get along with. But I’m pretty sure if everyone else would just agree with me, we could all be so very united. 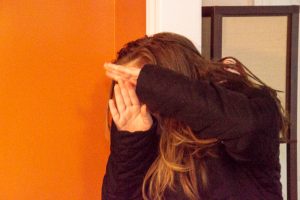 You may have you noticed there is some division in our country today (asked with a choking cough). Aided by media we see scenes unforgettable. We hear too much, yet not nearly enough. Real truth is a muddy ambiguity.

We feel the outrage of sides and form conclusions from the tug of war in our souls. With heavy hearts, sensitivities heightened, and morals are outraged, society is wound tight as a guitar string about to break.

In John 7 the curtain is pulled back for a tiny but fascinating glimpse into Jesus’ personal life. Jesus has risen to the popularity of a superstar. Everyone is talking about Him, and as greatly as He gathers followers, He accumulates enemies.

So, with this backdrop, the chapter starts by telling us Jesus is avoiding Judea because people are out to kill Him.

But his siblings have some advice for their older brother.

“Jesus’ brothers said to him, “Leave Galilee and go to Judea, so that your disciples there may see the works you do. No one who wants to become a public figure acts in secret. Since you are doing these things, show yourself to the world.” John 7: 3-4 (NIV)

Reading their words, one would think they were patting him on the back, “go for it, brother. We’ll make you a star.”

Jesus’ brothers’ intent was built on a foundation of unbelief.

Division thrives on a viral world

Jerusalem’s population split sides. Some said Jesus was a prophet and some claimed he was a charlatan. His popularity was enormous until it turned against Him. Until hate went viral.

Division thrives on a viral world.

Jesus never shied away from division

We applaud Jesus as a unity promoter. He was called the Prince of Peace. But the unity He brought wasn’t a sweet sentiment. It was a fact. It tore down the wall sin built and bridged the way to a perfect God.

In His life on earth, Jesus never shied away from division. In fact He assures us there will be divisions that will hurt and cause pain.

In the crazy contest to be heard, to make our voices the loudest, our ideology the most righteous, unity built on the wrong foundation often turns mob like. It sidesteps the fundamental issue of unbelief.

unity built on discord will crumble

“…show yourself to the world…”

Shared dislike and hatred is a foundation of clay not rock. Like a tween in the throes of catty offenses, unity built on discord will crumble.

Today’s world begs the question, “why can’t we just all get along?”

And the only true answer begins in submission to Christ.