“And when the people of Ashdod rose early the next day, behold, Dagon had fallen face downward on the ground before the ark of the Lord. So they took Dagon and put him back in his place.” 1 Sam. 5:3 ESV

Snow is falling thick outside our Virginia home. It is beautiful in the way it purifies the entire landscape. Our out-the-back mess of criss-crossed brown winter branches take my breath away by their sparkling brilliance.

The first real snow of the winter has layered itself on top of our patio and its possessions, a covered grill, vases and chairs. The winter-naked Virginian hills are clothed by an unmarred smooth thick white blanket.

It is like a fresh page. A blank unwritten script. Like an unblemished New Year stretching as far as I can see.

But its perfection won’t last long. Its whiteness will be muddied by passing cars. Its smoothness marred by footprints trampling through. Folds of creamy drapery will slide and slip and drop in big wet chunks. Bare trees and bushes will show their raw limbs again.

In 1 Samuel, the Israelites had lost their way. They strayed from God, and His presence with them stolen away. The Ark of the Covenant, a visible demonstration of God’s desire to dwell with His chosen own had been captured by their enemy. Without His protection they were uncovered and vulnerable.

The Philistines, at first fearful of the Ark’s power, believed it to be a god. Pride of conquest overcame hesitation and the ark of the Covenant was brought into their pagan temple. They placed it next to their own god Dagon.

But, when the Philistines rose early the next day, Dagon, had fallen face downward before the ark of the Lord.

So what’s a people to do when their god has toppled? Why, pick it up and put it back where it belongs, of course.

And this is the continuum of try try again, of new resolve and self-focus that we fall into easily when we recalibrate plans and goals without submitting them first to God.

I love this story in 1 Samuel. I love it right now as I gaze out my window, with the perfection of the snow still intact. I love it knowing already how the story ends. I relish a victorious God and assurance that any god other than the One True God doesn’t belong in any of our lives.

The next morning, what did the wondering eyes of God’s enemies see?

Dagon was again face down on the ground before the ark of the Lord. Only this time the head of Dagon and both his hands were broken off, lying in the threshold. The temple threshold received great respect for it separated what was considered sacred from what was thought to be common. Yet, there was Dagon, the statue, with only a trunk left lying in a position of submission before the ark of God in the threshold.

Idols can be well disguised. Certainly most of us don’t have an ancient god standing around to which we bow. However, instead of a carved image, something else may take the place where only God must be. It might even be something noble, a person or cause. It could be a career, comfort, a ladder to climb, or goals waiting for fulfillment.

Idols can be well disguised

Recalibrating for a New Year should never shift us to put something else in a god spot other than God Himself. The story is a great reminder as we plan 2022, to not make a Philistine mistake.

“So they took Dagon and put him back in his place.”

Any god, other than the One True God, cannot stand.

A new year can sometimes mean rather than constructing new gods, we first shatter some old ones. The world with its philosophies would try to convince us that other gods can stand beside our God, good, noble, and even shiny ones. As if something else can share the glory, side by side like best buds.

Any god, other than the One True God, cannot stand

A New Year is really first and foremost about God’s glory.

Are my plans and purposes centered on lifting Him highest? Or like Israel’s conquerers, am I trying to go halves with Him while I prop up another god next to Him? 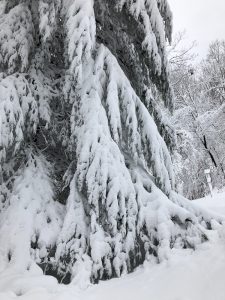 The thick Virginia snow has stopped. Heavy laden trees bent low are beginning to shed sheets of snow burdens. Their arms rise again. Branches snarled brown and bare stand out against a blue sky. Sparkling perfection begins to be scarred by melting away realities. Life halted for a day, will begin in earnest again tomorrow.

But this I know for every tomorrow. There is only One God and He Alone will reign.