What if Tarzan hadn’t married Jane, the tree swinger? What if Tarzan married Penelope who didn’t share the same desire to swing from a tree?

What if she had no idea that people killed spiders with their bare hands and then thought it romantic to hold hands.

Perhaps she couldn’t fathom killing a creepy-crawly without loud exclamations and jumping about whilst pummeling the hairy creature into smithereens. The mere thought of such beasties might have made her shudder like leaves of a branch with a monkey on it.

When the stud married the wimp he considered rivers of sweat proud droplets of manliness that drenched his clothes and dripped like sunshine off his nose. She thought of it as necessary slime and entirely without need for connection until removed by a long shower and plenty of soap.

Language barriers of Tarzan-speak and Penelope-speak could be huge. She might envision a stroll in the evening hand in hand (minus spider guts), a quiet enjoyment, but he sees an iron man marathon. In Penelope-speak, a bike ride is like a gentle stroll on wheels, the breeze wafting through her hair. To him its a flash of lightning speed, up hills, around corners, like a wild race to a final finish.

A chill in the air is crisp and invigorating while to her it’s freezing. The sun still sleeps in his early morning. She allows the sun some time to adjust before it has to look bright. While she dreams of remodeling a kitchen, he is bent on demolition.

It is possible that Tarzan might have tried to push her off the tree a few times, desiring only to let her experience the exhilaration of free flight. To which her reply would have been an ever tightening grip on the bark.

My Tarzan grew up on the mission fields of Ecuador. He had snakes in the toilet and played baseball with bats (the flying kind). He hiked mountains and swam in muddy creature-filled rivers. My Tarzan has taken me to 25 countries with all manner of swooping, crawling and slithering things.

He never does things half-way. He works harder, loves better and flies higher. He is passionate for Jesus.

My Tarzan cleans up nicely.

I dig into his neck with a death grip as we speed toward the next stage of life, while he reminds me of Who holds the rope.

He teaches me daily, and demonstrates in life what Paul wrote in Colossians 3:23-24. “Whatever you do, do your work 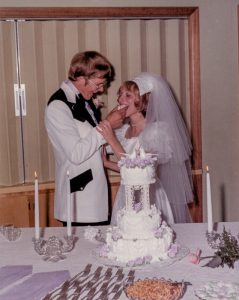 heartily, as for the Lord rather than for men, knowing that from the Lord you will receive the reward of the inheritance. It is the Lord Christ whom you serve.” (NASB).

It’s been an adventure I’d never want to be on with anyone else. Here’s to another 44 years of swinging from trees.

-Sylvia (aka Penelope)
“And please, please, watch out for that tree!”