Ugg, this time of year I fight a big battle with a tiny creature. What is it about autumn that calls all gnats in the Kansas City area into my kitchen like the plagues of Egypt?

Woe to the one who brings home the bananas.

“Blind guides,” Jesus rebuked in a litany of strikes against the Pharisees, “who strain out a gnat and swallow a camel.” (Matt. 23: 24) NKJV. 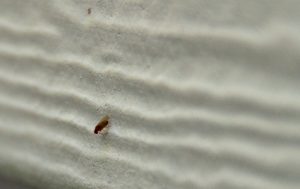 Gnats, those tiny pesky insects flying around my counters, were not kosher, according to the law given to the Israelites in Leviticus.

I gotta admit I find a lot of passages in Scripture difficult to read and hard to understand. As one who spent a big chunk of life overseas, trying to live out the gospel in a foreign context, Jesus’ words in Matthew, chapter 23, sting like alcohol on a raw scraped knee.

“…For you shut the kingdom of heaven in people’s faces….For you travel across sea and land to make a single proselyte, and when he becomes a proselyte, you make him twice as much a child of hell as yourselves…” (Matt. 23: 13-15; NKJV).

Harsh words from a man of love and compassion.

Intent on the letter of the law, Rabbis strained wine to remove even the smallest unclean insects. Piously they didn’t want to swallow one by mistake, which is pretty easy to do. I know.

That annoying minute insect, according to the laws of cleanliness would render the entire person unclean.

Because, the problem with self-righteousness is that we aren’t.

Because, the problem with self-righteousness is that we aren’t.

“…For you shut the kingdom of heaven in people’s faces….”

While the religious rulers embraced form, they refused to recognize Jesus, the Ruler of the Universe, who stood in their presence.

Outward reformation is impossible to maintain without inward transformation.

Righteousness is the undeserved gift of redemption in Christ.

It ends the impossible cycle of striving to be good enough to earn what we cannot. And it humbles us from sliding into sanctimonious grace-bragging.

Woe to us if our message disciples others to a system rather than a Savior, a fad rather than Biblical truth, or a “church” devoid of the body of Christ.

Any other message is the false gospel of straining gnats and swallowing camels.

*Photo at top by Steven Su on Unsplash