“We seemed to ourselves like grasshoppers, and so we seemed to them.” Numbers 13:33  (ESV)

It’s impossible to read about the Israelites’ long exodus from Egypt without being convicted of similar acts and attitudes of anemic faith in my own daily life.

They grumbled. They worried and fretted. They blamed. They rebelled.

Sounds like someone I know. Oh ya, that’s me.

Twelve leaders, chosen by God were instructed to spy out the land. Their purpose wasn’t to weigh whether or not to go into the land. It was already promised them. It was a recognizance mission to learn about the people living there, the country’s strengths, weaknesses and terrain.

After forty days, the 12 returned with pomegranates, figs and a cluster of grapes so large two men carried it on a pole between them. Proofs of the marvels of a land flowing with milk and honey.

But they also brought back two differing reports of what they saw.

“We seemed to ourselves like grasshoppers, and so we seemed to them.”

Ten faithless spies incited an entire nation to abandon trust in God, because they saw the land through faithless lenses.

But, Joshua and Caleb saw something completely different.

When I grumble and complain, I’m basically giving God a commentary of how I think He is doing. Just like the Israelites.

Within my commentary I do not take into consideration God’s sovereignty in allowing me to be where I am and facing what He has allowed.

When I grumble and complain, I’m basically giving God a commentary of how I think He is doing

There are the hard forks in the road where faith in a Mighty Father is crucial. Especially when those decisions are life changing and irrevocable. At those junctures, a clear look at the Savior changes everything.

Joshua and Caleb, went into the promised land with vision set on the fact of God’s call. They looked behind at past faithfulness and ahead at future promise. The rest didn’t really matter. He would be in the details.

“And do not fear the people of the land, for they are bread for us. Their protection is removed from them, and the Lord is with us; do not fear them.” Numbers 14:9 (ESV) 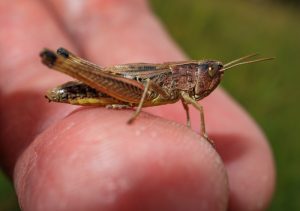 Photo by Kevin Grieve on Unsplash

Here’s the thing, there truly were giants in the land, but honestly if you happen to be a grasshopper, pretty much everything else is a giant.

They look up from their tiny prickly little world and go, “Whaaaaat? There are giants!” And then they hop about like grasshoppers.

You may feel that grasshopper feeling. You might feel like a little person in a land of big and important, impossible and unattainable. Move over little hopper. I’m there too.

honestly if you happen to be a grasshopper, pretty much everything else is a giant

Giants are all around.

If I’m not anchored by what God declares true, I see things from an itty-bitty vantage. Complaints follow. Whining happens. I am overwhelmed. The obstacles are too big, the requirements too stringent, the political situation too frightening, and the expense beyond our budget.

My little grandson says with his lips puckered out and a little spit flying, “God is huge!” He puffs his body up to be like the Hulk which in his three-year-old mind is about as big as the whole world, or maybe the T-Rex, which is even bigger, but still tiny next to “Huge!” 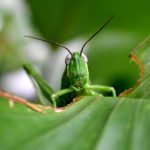 Like a grasshopper, I am guilty of looking at life as if its problems are bigger than God. I’m right there with ten men who gave a bad report, my mind lists the excuses, the problems, the “never gonna happen’s.”

What was God’s reaction to the spies’ lack of faith? He described it “despising Him.”  (Numbers 14:11)

God rescued the Israelites from cruel slavery. He miraculously opened the seas and destroyed their persecutors. He lead them through a wilderness by a pillar of fire and smoke. He spoke to Moses “face to face.” But it wasn’t enough.

Appearances that shut out faith are deceiving.

God stands far above the giant. He invites us to look higher, beyond what seems to be, to Who He is. Take a long gaze at what has already done, review His faithfulness, and trust Him forward.

Appearances that shut out faith are deceiving

Click to tweet
“So faith comes from hearing, and hearing through the word of Christ.” Romans 10:17 (ESV)