“Are you the king of the Jews?” asked Pilate.

Easter mornings looked like new clothes and smelled like ham baking. It culminated with Easter Egg hunts and marshmallow peeps.

With my new little pink dress spread out like a cloud around me on a wooden church pew, I wondered, who had the painful job of weaving Jesus’ crown of thorns? Did his fingers bleed, like mine when I pricked them on the rose bush?

My thin legs stuck straight out in front of me, too short to bend at the edge of the smooth oak bench. I admired my patent white shoes and pink laced anklets. Pleased pink described me from the lacy Easter bonnet on my head to its matching pink ribbon firmly tied under my chin.

My favorite bit of the Easter routine was the bonnet. Every year my parents bought me an Easter dress and a new headpiece to go with it. I raised a hand now and then throughout the service, and fingered its white lace adorning my blonde hair. The bonnet was like glory on my head.

But that morning, for some reason my six-year-old mind couldn’t stop seeing rough hands twisting thorns, intent on hurting someone. It made my tummy feel queasy. I didn’t understand why soldiers wanted to inflict pain on anyone, but Jesus most of all. I closed my eyes and pictured woody vines, sharp and gruesome being worked into the mockery of a King’s crown. I wondered if maybe the hands wore gloves so thick pointed barbs couldn’t penetrate.

Click to tweet
As a child I hadn’t yet realized the splendor of a crown isn’t in its beauty but rather in the audacity of its triumph. The crude prickly spikes,  pressed into my Savior’s head, cruel and painful, today I see as glorious.

“Again and again they struck him on the head with a staff and spit on him. Falling on their knees, they paid homage to him.” (Mark 15:19; NIV)

The Creator created. Ever present, self-existing, wise and wondrous, He spoke the cosmos into being. But, sin with its insidious tentacles of desire, shattered a perfect world, spiraling Adam along with you and me into an abyss of separation.

His beloved creation man and woman, those to whom His own breath brought life, disobeyed. Intimate relationship with the Creator shattered. Destruction fractured earth’s perfection. 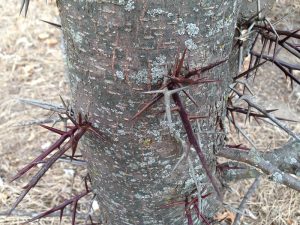 The Maker, holy and just declared, “Cursed is the ground because of you; through painful toil you will eat food from it all the days of your life. It will produce thorns and thistles for you, and you will eat the plants of the field.” (Gen. 3:17-18; NIV)

And this, sin’s curse, did the Savior, the promised Redeemer not wear in victory?

For as the spikes bore into his forehead, when the thorns pierced his brow, as the soldiers mocked and jeered, He knew.

In His suffering the glorious weight of a crown of thorns declared the day had come, Jesus fulfilled the blood payment for sin’s curse.

The Infinite clothed in finite flesh bridged the chasm with arms outstretched on a cross, with head bowed, bearing a crown of thorns.

They encircled his head like a wreath of victory.

Worthy is the Lamb to wear the crown for He is indeed King of Kings and Lord of Lords.